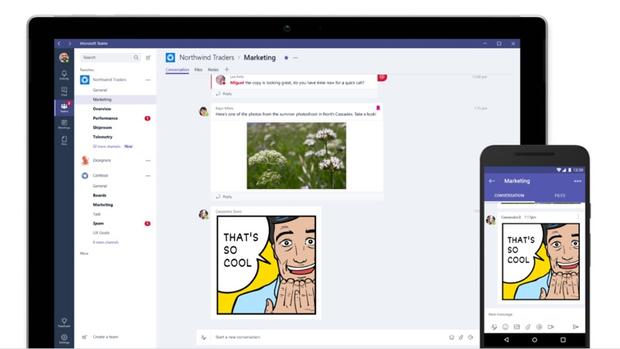 Satya Nadella, CEO of Microsoft, announced the product in preview at an event in New York City, and other details were given in a blog post. Currently, the post said, Teams is available in preview for Office 365 customers who have Enterprise or Business plans, and it will be generally available sometime in Q1 of 2017. Specifically, it will be available to customers with the following plan types: Business Essentials, Business Premium, and Enterprise E1, E3, E5, and the now-retired E4.
Aesthetically, Teams is very similar to Slack. Teams supports persistent and threaded chats, and it also contains channel-esque grouping for smaller teams or groups. Support for animated GIFs and emoji is also there, along with integration for Microsoft’s bot framework.
Skype for Business is deeply integrated in Teams, so users will be able to participate in voice and video conferences from the app. According to the post, Teams also supports Word, Excel, PowerPoint, SharePoint, OneNote, Planner, Power BI and Delve, so teams can work on projects within the app as well.
As noted by CNET’s John Falcone, Teams will be a free add-on for existing enterprise Office 365 subscribers, but an admin will still need to deploy it. There’s also no freemium model for Teams like there is for Slack, and it won’t really be available to individuals or families.
In a surprising move, Slack addressed the announcement of Teams in an open letter posted on their website. The letter, penned by “Your friends at Slack,” welcomes the competition and offers advice that Microsoft should commit to an open platform and “do this with love.”
Of course, Microsoft has a long way to go to catch up with Slack. However, the company has been making strides in adding next-gen tools and features to keep up with today’s fast-changing workforce. But, novelty isn’t the key to success. For Teams to gain traction, Microsoft will need to prove to its customers that it has a superior product to Slack, or a product that integrates better with its suite of tools and can better help professionals get work done.