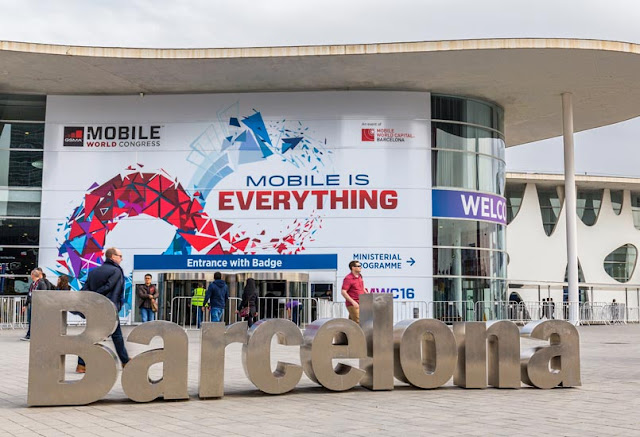 It’s that time of the year when mobile companies from around the world gather in Barcelona to show their latest advancements. Though MWC officially starts from Monday, February 27, most of the announcements are expected to happen over the weekend starting with BlackBerry, with its hardware partner TCL Alcatel’s event scheduled for Saturday late evening. Let’s take a look at all the launches and announcements expected to take place at MWC 2017.

BlackBerry: MWC 2017 unofficially kicks off with TCL Alcatel’s press conference scheduled to take place on Saturday, Feb 25 at 6:00 PM GMT. The company is going to showcase the Mercury, which it had teased a little during last month’s CES. Even though BlackBerry OS is dead, TCL Alcatel will try to appeal to hardcore BlackBerry fanatics with a physical QWERTY keyboard, which will have most of the keyboard functions that we first saw in the BlackBerry Passport. One key difference could be that the space bar could also double up for the fingerprint sensor. The phone will run on Android with BlackBerry’s “OS” on top. Apart from the BlackBerry Mercury, we could also hope to see other smartphones and accessories that TCL Alcatel usually unveils during MWC.

TCL Alcatel is the only major brand that’s hosting a launch event on Saturday, with most companies preferring Sunday, which will kickstart with LG’s press conference.

LG: There’s hardly any surprise about what LG will showcase on Sunday (11:00 AM GMT) at its MWC press conference. Apart from the leaks, the company itself has revealed a lot about the LG G6, which sports a unique 5.7-inch 18:9 QHD+ display, which is expected to be as close to a truly bezel-less display as possible. The G6 will come with a unique user interface that will take advantage of the 18:9 display with square windows.

The smartphone will come with a dual 13-megapixel rear cameras with 125-degree field of view, which it says resembles how the human eye sees things. Unlike the G5, this time both the cameras will work in tandem.

Apart from the G6, LG usually also unveils a range of mid-end and entry-level smartphones as well as a bunch of accessories every year and we have no reason to think it would be any different this year. Today, the company unveiled a mid-range X400 smartphone in Korea, which could possibly be unveiled at MWC.

Huawei: Soon after LG’s press conference, Huawei will be hosting its MWC event (1:00 PM GMT). The Chinese company has confirmed that it will be launching the P10, which as the name suggests, will be the successor to the P9. If the leaks are anything to go by, the Huawei P10 is set to look fairly similar to the P9 with slight tweaks.

As for the specifications, the Huawei P10 is expected to come with a 5.5-inch flat screen display, Kirin 960 chipset, 4GB/6GB of RAM, 32GB/64GB/128GB internal storage options. Like its predecessor, the P10 too will be coming with a dual-camera setup co-developed with Leica. Rumors hint that pricing for the p10 will start from RMB 3,488 ($510 approximately) for the 32GB variant, and going up to RMB 4,688 ($690 approximately) for the 128GB variant.

The highlight of the day, however, will no doubt be HMD Global’s event, which kicks off at 3:30 PM GMT. The company will be launching a host of Nokia-branded smartphones, and if the Nokia 6 was anything to go by, there’s still some huge anticipation around the iconic Finnish brand.

Nokia: With the Nokia 6 already available in China, leaks suggest, we could see some more smartphones like the Nokia 3, Nokia 5, and Nokia 8. As the names suggest, these smartphones will be placed across price segments starting from affordable and going up to the premium range. Rumors also hint at one more Nokia-branded tablets running on the Android OS.

But what has really created a buzz is a recent report claiming that HMD Global could launch a modern rendition of the iconic Nokia 3310. Back in the heydays, the Nokia 3310 was a household name thanks to its incredible battery life and near-invincibility. It will be interesting if this new version will be able to strike the right chords, and reports claim it could cost as low as $60.

Lenovo/Motorola: Kicking off almost simultaneously with Nokia’s event will be Lenovo’s press conference with all rumors so far pointing towards two new Motorola smartphones — Moto G5 and Moto G5 Plus. Leaked renders and alleged hands-on photos have hinted towards a metal body and an upgraded design over last year’s Moto G4.

The Moto G5’s expected specs include 5-inch 1080p display, Snapdragon 430 SoC, 13-megapixel rear camera, 5-megapixel front camera, and a 2,800mAh battery. The Moto G5 Plus, on the other hand, is expected to come with a 5.2-inch 1080p display, Snapdragon 625 SoC, 4GB RAM, 16-megapixel rear camera with dual-LED flash, and 5-megapixel selfie camera. Rumors also claim that the Moto G5 could be priced around $200, while the Moto G5 Plus could be priced around $250.

The pre-MWC events are set to conclude with Samsung’s event set to kick off at 7:00PM GMT. But if you are waiting for the flagship Galaxy S8 smartphone, you will be disappointed. Samsung has pretty much made it clear that it will be unveiling a new tablet.

Samsung: Based on the rumors we have come across so far, the Samsung Galaxy Tab S3 is expected to feature a 9.6-inch AMOLED display, Snapdragon 820 processor, 4GB of RAM, and 32GB/128GB internal storage options. Reports further claim that the tablet will feature a 12-megapixel rear camera, 5-megapixel selfie camera, 5,870mAh battery, USB Type-C port, and fingerprint sensor. The tablet is also expected to come with an optional S Pen stylus.

Besides the Galaxy Tab S3 tablet, Samsung could also unveil a new version of the Gear VR headset, along with a game controller, as well as the fourth-generation Galaxy Xcover smartphone.

February 27 will kick off early with Sony hosting its event early in the morning at 7:30 AM GMT. Gionee is also set to host its event a bit later in the day, which kicks off at 10:00 AM GMT. The likes of ZTE or OPPO aren’t really hosting a launch event, but will showcase their latest products at their respective booths.

Sony: Though details are a bit scarce, Sony is expected to unveil the XA (2017) smartphone at MWC 2017. Other rumors claim that Sony could unveil as many as five smartphones across different segments. Based on what we have come across so far, the Xperia XA (2017) is expected to come with a 5-inch display, 23-megapixel camera, 3.5mm audio jack, and a USB Type-C port.

ZTE: 5G connectivity may still be a distant dream, but ZTE believes it is still the right time to unveil a smartphone supporting the advanced network. The company is expected to launch a smartphone, called Gigabit, which will offer top-of-the-line specifications and features. Rumors also suggest that ZTE could launch its first-ever Android Wear smartwatch, dubbed Quartz.

OPPO: OPPO is riding high on a successful 2016 where it largely ruled the smartphone market in China. At MWC though the company isn’t lining up to make any big smartphone launch announcements. Instead, the company has teased that it will be showcasing its ‘5x’ smartphone photography technology. Though details are scarce, the company promises that this new technology will give users “unprecedented ability to capture highly detailed images.”

HTC: HTC too is believed to be participating at MWC, but it won’t be launching any flagship smartphones. Leaks suggest it could unveil a mid-range smartphone dubbed HTC One X10. Successor to the One X9, this smartphone is expected to come with features like 5.5-inch 1080p display, MediaTek MT6755 octa-core chipset, 3GB of RAM, and 32GB of internal storage. The smartphone could also come with a 16-megapixel rear camera, 8-megapixel selfie camera, and is likely to be priced somewhere around $288.