By Admin March 15, 2017 3 Mins Read
Share
Share on Facebook Share on Twitter Pinterest LinkedIn Email
A new Kickstarter project aiming to bring the Android OS experience to iPhone users recently met its goal. The product is called ‘Eye’ and it’s rightfully described as a smart iPhone case, as it packs a handful of hardware components including a display and all the necessary internals to run Android 7.1 Nougat. In other words, the Eye is an iPhone case that doubles as an Android smartphone and turns iPhones into pseudo-hybrid devices with dual OS. 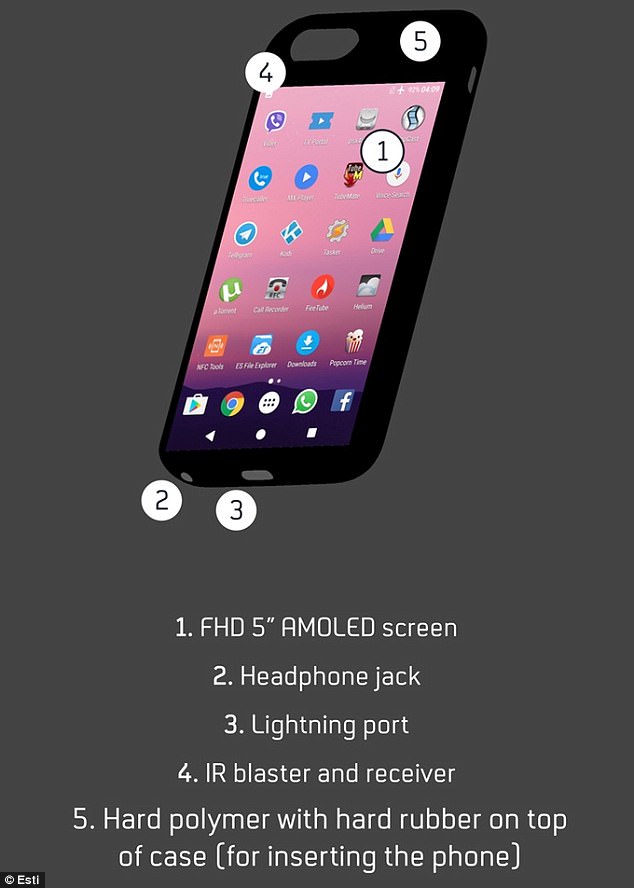 The Eye accommodates a 5-inch AMOLED display with a generous resolution of 1920 x 1080 and is powered by a MediaTek Helio P20 System-on-Chip featuring an octa-core CPU along with a Mali-T880 MP2 (dual-core) graphics chip. In addition, the case incorporates 3 GB of RAM, 16 GB of on-board memory, a microSD card slot that can read up to an additional 256 GB of external storage, a 3.5mm headphone jack, an NFC chip and infrared sensor, and even dual SIM slots. It also offers support for wireless charging and incorporates a 2,800 mAh battery reserved solely for when the Eye is in use.

All in all, the Eye is a fairly complete Android package but does share a few of features with its “parent” device. This includes the camera setup, speakers, and microphone, but otherwise, the Eye comes with everything required to run Android OS in an independent environment. The eye will be released in two sizes, one for the iPhone 6, iPhone 6s and iPhone 7, and a larger model for the iPhone 6 Plus, iPhone 6s Plus, and iPhone 7 Plus. The Kickstarter campaign also comes with the promise that the next iPhone model will be supported a month after its release, and also gives backers the option to wait until the next model is launched.

The Eye Kickstarter campaign had an initial goal of $95,000 which has already been met and surpassed. At the time of writing, 1,416 backers have pledged a total of $194,858 and the project has 31 more days to go. The campaign also has a handful of stretch goals, including one at the $500,000 mark which promises an additional 7,200 mAh power bank for a total of 10,000 mAh. The $2,000,000 stretch goal includes a magnetic wireless charging car mount, and at the $3,000,000 mark, the Eye will receive IP67 water resistance to match the iPhone 7’s. Interestingly enough, the $6M stretch goal brings optional boot into Ubuntu OS, and at the final $15,000,000 mark the Eye will receive triple-boot capabilities including Windows 10 Mobile. There are also two stretch goals set at $10M and $12M, and if met they will allow customers to acquire the Eye in real leather or wood.

The Eye will retail for $189 and has an estimated delivery date set for August 2017.