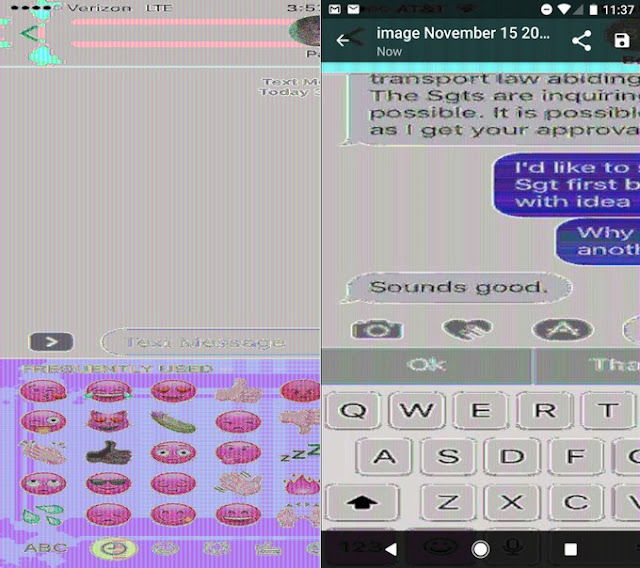 According to a discussion on Google’s product forum, screenshots from within any application (native or not) on the iPhone come across distorted (native phone, messages, email, other third-party apps).

Although the person who initiated the topic claims the issue doesn’t affect iPhone 6, 6s and 7, some say sending screenshots from the iPhone 7 to the Pixel phone results in the same distorted images.

It’s also worth noting that the problem persists even in Safe Mode, which suggests that this isn’t an issue with a third-party app. Also, the issue doesn’t appear when sending screenshots between iPhones or other devices powered by Android 7.0 Nougat or earlier versions.

In fact, screenshots from other Android phones and iPhones generation 6 or older show up normally, so the issue seems to be directly related to the Pixel phones and Android 7.1 Nougat, as well as the iPhone 7/7 Plus.

There must be some kind of incompatibility between Android 7.1 Nougat and the iPhone 7 and iPhone 7 Plus that doesn’t allow them to communicate accurately. It doesn’t even matter what messaging apps you’re using, so it won’t help if you start using other messaging app.

Some Pixel owners noticed that the problem is intermittent and that sometime they receive clean screenshots from iPhone 7/7 Plus devices, but that doesn’t happen too often and only with certain apps (i.e. Spotify).

Google has yet to acknowledge the issue and comment on the matter. Until then, those who use smartphones powered by Android 7.1 Nougat should expect this issue to continue to affect them.