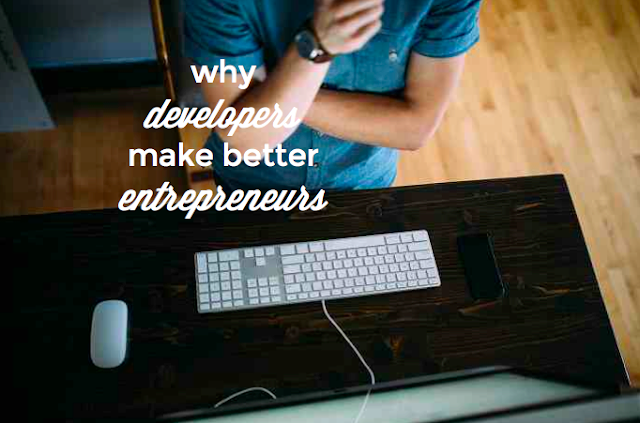 The popular (mis) perception of programmers is that they spend all of their time in darkened rooms, working with millions of lines of code, and perhaps aren’t always blessed with great people skills. Yes, I come from a programming background, so I may be a little biased, but that’s plainly nonsense.

Not only are programmers capable of amazing things, creating the building blocks of modern life and business, but they are also comprised of a varied and broad demographic. Many programmers are more than capable of going on to run a business too. Yes, making the journey from programmer to CEO can be scary and in some cases it’s a major transition. But anyone doing so would be in the best company. Bill Gates, Mark Zukerberg, Marissa Mayer and James Dyson have all made the leap having started out as programmers, and you’d have to admit that they have done alright!

From business development to analysing spreadsheets, naming things and solving problems, programmers have many transferable skills that can make them the ideal CEO for a company. These are the most important.

A vision for technology

Founders of a business can be technical – that’s acceptable in business. CEOs may also bring on a co-founder with a technical background; again, there’s not generally a problem with that. But it’s when the CEO themselves has a technical background that people start to question them, and for me, it’s hard to see why that should be the case.

Programmers have a vision of the technology they work with and have helped create, and they have a strong idea of how to drive that forward. Without that vision and drive, or in the hands of someone else, not only can the technology deviate from the path it was on, the business can easily begin to stagnate. Who other than the CEO should be the person driving a business forward in this way?

One of the most important attributes required to become a CEO that programmers may find hardest to adjust to is the ability to tell a good story. Storytelling is of the highest importance in business. Right from the off, surrounding yourself with talented people is vital, and to get the best people you need to convince them, which means spinning a yarn or telling a story.

This will continue as your business develops and grows. Next up might be a bank manager and then if your company is ready to launch, you’ll be meeting press so your storytelling needs to crank up a notch further. If you then reach the stage where you require investment, angel investors especially will fundamentally invest in the person rather than the business, so that person needs to show them passion, understanding and commitment, all of which comes through good storytelling.

This goes on and on. When in the process of securing DataSift’s Series C funding, I’d been told that the key to success is all about the numbers. This is partially true but I’d suggest that bad storytelling can reduce funding by 20% and a good story may increase it by 20%. If you are dealing with a funding round of £20 million, that’s a major difference. As with anything, it’s all about practice. Do it as many times as you need, and learn to convince people with your story-telling.

Programmers can do business

One of the major misconceptions is that programmers don’t do business, a myth perpetuated by business programmes on TV like Dragon’s Den and The Apprentice. Business development for example, is an area where programmers initially probably don’t have much exposure to, but it is also an area where they can add real value.

Bringing a high level of technical expertise into such a meeting adds real weight to a pitch. It can play a significant part in convincing people that it’s not just a sales team there to seal the deal, and that you really do know what you’re talking about.

Another aspect of business for programmers to get to grips with, is the use of Excel. By far and away the most common place to put data and probably the most-used tool in many businesses, Excel is not a popular product with programmers as a rule. However, learning to use Excel – it’s very easy – will be invaluable to the programmer turned CEO. People want revenue projections on a business at almost every stage and want to see data represented in a form that is easy to understand. Excel is the way to do this.

Programmers can be highly creative when it comes to naming products and services. They have to name different bits of code all of the time, so consistently and clearly naming elements of a business (internally and externally) should be straightforward. Names that show a clear picture of what a business actually does are crucial and who better to do this than the people that helped build the technology behind it.

Finally, programming is essentially about problem solving. A programmer wants to be challenged with something that has never been done before, is complex and the reward is bringing it to life. To do this requires a keen mind, used to thinking laterally to solve problems. This is not really any different to a business challenge. A CEO needs to think, muse, discuss and identify a way around a problem, and a background in programming gets you used to thinking in this way.

My journey from programmer, to lead programmer, to manager and onwards and upwards to CEO, has at times felt daunting and scary. But I made it, and there is absolutely no reason why other programmers can’t do the same. In fact, I believe they are uniquely suited to doing so.